The bicycle industry is alive, well and growing. And with unexpected numbers.

We are the first country in Europe in the amount of bicycles produced: 2,339,000 vehicles, despite the slight decline in production by -0.23% in 2016. Followed by Germany, Portugal and Poland. And if the situation is optimistic, it is greatly owed to the craftsmanship, the sector that gives greater impulse to the bicycle market. 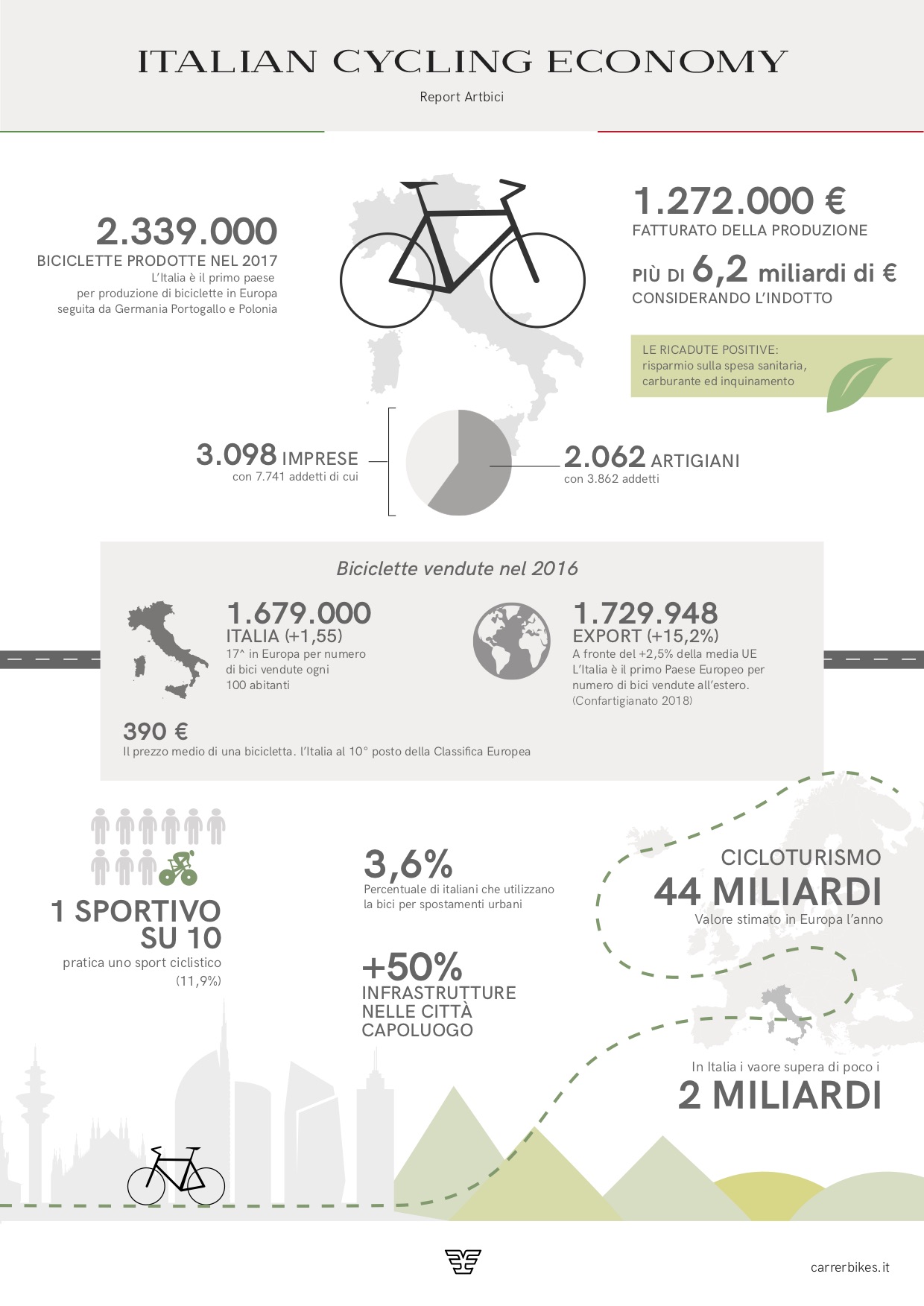 “Bicycles are in one of the sectors in which the artisan entrepreneurs have been the architects of the rebirth and the revival of the Italian manufacturing quality. Cesare Fumagalli

In fact, after years of difficulty, in which production has slowed down, and after the influx of standard products of dubious quality into the Italian market, the bicycle economy is flourishing thanks to many Italian producers, many of whom are artisans.

In Italy, craftsmanship is a milestone and has a long tradition. In the bicycle supply chain among the 2,062 companies (+ 5.4% in the last five years), 2 out of 3 are artisans (66%) and increase to 9 out of 10 in the repairs. The companies are located throughout the Peninsula and concentrated in three regions: Lombardy, Emilia Romagna and Veneto, where there are 1,092. Trentino is the region with the greatest vocation of the craft of the bicycle supply chain, and Bolzano is the first specialized province.

If bicycles are so greatly liked, what are the universally recognized qualities in the Italian craftsmanship and therefore also those specialized in two wheels? Mainly “tradition, innovation, talent, taste and creativity“. Values that also reward the exports, which grew by + 2.7% in 2017, being worth 600 million Euros (200 million complete bikes, 400 million components) Italy is the third European exporter, after Germany and the Netherlands. Our best customers are: Japan, + 24.2% and France + 14.7%. The French market is at the forefront of our exports.

The bicycle in itself concentrates in the values of environmental sustainability and slow mobility. It is no coincidence that the bicycle chain companies that have developed most are located in those areas that have a greater “cycling value”, Puglia, Trentino Alto Adige, Tuscany and Lombardy. This is because the bicycle market is not isolated. The growth of both production and sales is proportional to the development of roads and infrastructures, and the best performing European countries are those that invest more in this direction.

Today in Italy there is still a long way to go on two wheels: only 18 people out of 1,000 inhabitants use the bicycle to go to work and to school (1,066,000); 2,414,000 are those who practice cycling at an agonistic and amateur level; the growth in cycling holidays and all the positive effects on health and fuel economy, are worth over € 6.2 billion.

This emerged from the interesting ‘Artibici 2018’ report created by Confartigianato and presented on March 22 at the Milan Triennial, at the Innovation and Craft Society forum “The bicycle economy: numbers, stories and strategies for growth” (read here)